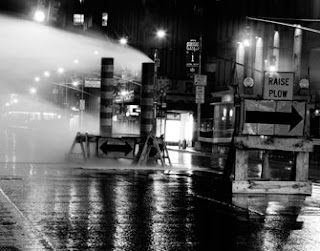 Soooo I just recently became a sponsor at Cup of Jo and BOY you should have seen my website hits last night. I mean she just put the link up late yesterday afternoon. I have this service called hitslink that shows what websites people are coming from to get to my website as well as what area of the country they are in. When I logged in this morning there was this huge spike and every single person was from Cup of Jo. Thanks Joanna!!! Now the reason why I have the image from D-Nice and titled this post NY NY is because Joanna is based in New York City yes New York City.

Now I have never been to New York but everyone I know thinks I would feel right at home there. I don't know because I am very sensitive to people's energies and energy in environments. It seems to me that everyone I know from NY (and boy do I know a lot of transplants here in the ATL) they seem to be so busy going hard that they tend to wear me out. I go hard but I also like to relax and just listen to Julie Dexter while drinking some Penfold's Merlot (new favorite). Anywho my link is up and I couldn't be happier Yay!!!